by Maíra Gouveia, designer and researcher at Questtonó

Just over 300 miles separate the capital Cuiabá from Sapezal, an upcountry town located in Mato Grosso near Rondônia and Bolivia. Stretching another 138 miles to the end of the MT-235 highway, the road ends in Comodoro, the last city before the Brazilian-Bolivian border. Amongst all this, the landscape is a patchwork of cotton, soy and corn monocultures alongside the indigenous Pareci and Nambikwara lands, the latter of which was visited by the anthropologist Levi-Strauss in the 1930s.

There we were, in a seemingly foreign place, only equipped with design thinking methods.

In the second half of 2018, I had the opportunity to be part of a great design research project at Questtonó. Our challenge was to understand the relationship people in remote and often poorer areas of Brazil have with financial literacy and behaviors to develop new payment solutions for digital inclusion. Uncommon for most design briefs, we were about to embark on a journey into Deep Brazil. 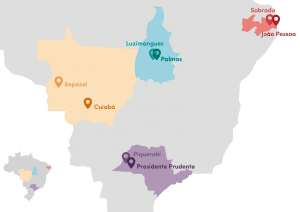 Getting to those places was a big challenge already – one that only grew in size when we found ourselves facing the lack of infrastructure in these small cities, Sapezal (MT), Piquerobi (SP), Sobrado (PB) and Luzimangues (TO). But nothing could prepare us for this immersion in a Brazil that many Brazilians do not even imagine exists.

Deep Brazil reaches people in a truncated, stereotyped and misinterpreted way. Living and working in São Paulo or other major capitals makes our knowledge and impression about our country biased — often out of sheer ignorance.

This is something we should think about: when we practice design, when we propose solutions, who are we talking to? Most of the time, with Paulistanos — or Cariocas, or Recifenses, and even within this cut we generally only reach a contemporary urban context. Is it worth talking about innovation in these places?

Getting to Sapezal was difficult.

We arrived at 5 am at the bus station in Cuiabá and boarded a bus with no air conditioning nor a toilet, hoping that 10 hours later we would be at our final stop. Luckily we were in August, at the height of the dry period in the Brazillian midwest, and the bumpy road was thankfully not thick mud. The problem was the 106F heat outside — which proved to be slow torture inside the suffocating bus, red dust rising on a path marked by large stretches of emptiness. Six hours until the end of our trip, I woke up with a start and realized that there was no one else on the bus. With no signal on my phone and no water to drink, I thought the best thing to do was to fall asleep again. 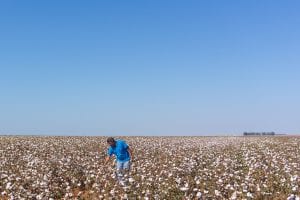 Right at the entrance of the city we saw expansive cotton fields. Cotton production is the main economic activity in the region. Photos: Maíra Gouveia

When we go to a place like this, so different from our reality, our first reaction is pure surprise. It became clear that the routine there was well demarcated, dictated by the pace of work on the large farms that surround the city. This was a big discovery that guided our design thinking research findings. We were surprised by Sapezal, but Sapezal was also surprised by us.

At the bus station, we were approached by people who wanted to know what we were doing there. Our driver, Toninho, got in the car and said, “But how did you end up here?” At the hotel again: “why are you here?”

What we were doing there, and in other parts of Brazil, was the exercise of listening to other people, in the greatest sense of expression. At every home visit, in every group, in every conversation held in the square under a tree, we used all of our skills to talk to people about subjects they most likely had never had thought about before. 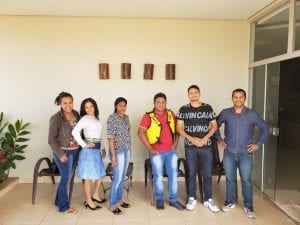 Our design research led to proposed solutions for digital financial management that was only possible through understanding the life and context of the users – their fears, dreams, and workarounds – these small details that gave us insight into who these people are as humans.

Amid much distrust and shyness, our ultimate goal was to show that everything that was being said was extremely valuable. And above all, that everyone should feel responsible for building a better experience — for themselves and for the rest of the city.

The size of our challenge — and what we did — only made sense sometime later. We travelled to 8 cities and interviewed almost 800 people with unbelievable, sad, happy, but mostly unique stories. Getting to know a little bit of each one of these people motivated us into designing the best possible solution for them. Design research, when done right, is a work of empathy — their problem is our problem. We, the humble pioneers of Deep Brazil, had an even more important task — to be a spokesperson for people who had never been heard before. And that’s a giant responsibility.

So, as I asked before, is it worth talking about innovation in places like these? And the answer is very obvious: of course it is. Innovation belongs to all of us. No matter where people live, they’ll always be users of products and services that most of the time were created by people who are living in urban contexts, people who don’t share the same referential universe.

We need to understand how different users perceive value in order to create meaningful experiences.

Regardless of if we are talking about products, services or brands we need to take different points of view into consideration. Without that, we will keep on designing systems that are far below their true engagement and use potential.

Our mission as researchers, strategists and designers is to shape the desires and longings — whether from someone in New York, or from a resident in a Sobrado settlement. To orchestrate chaos, it is up to us to analyze it with an open heart. Take a step back, forget the hypotheses and just listen.

On the way back to Cuiabá, the bus had A/C. It had a toilet, and a few stops for us to stretch our legs and eat something. It felt as if I was crossing an imaginary portal back into what I was familiar with — but I now knew what was on the other side. Being a researcher is first and foremost being a person — and talking to other people. Design only makes things palpable, bigger — and helps us understand that in order to transform, we need to be open to being transformed as well.